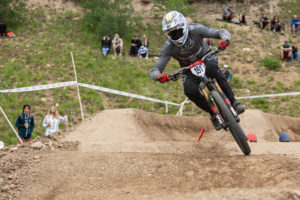 Neko raced dual slalom as well, making it to the round of eight. PC: Hefel Photography

Luca was banged up from a practice crash that ended his weekend and Neko was buzzing after his race.  The eventual National Champion, Mitch Ropelato, knocked the DH specialist out in the round of eight.

While the athletes were a highlight of the event for the fans (both the kids and the big kids), TRP’s sneak peek of the yet-to-be-released DH7 components left an impression on all attendees. TRP received compliments and encouragement for their new shifter and derailleur. Sentiments ranged from ‘This stuff looks amazing’ to ‘I just might need to get a downhill bike, so that I have somewhere to hang the parts’.

DH7 and 223mm rotor details were only for attendees, so those riders who weren’t in attendance will have to keep their eyes peeled for the soon-to-come launch.

The TRP athlete tested DHR 2.3mm brake system is available now in the TRP Cycling web store and through TRP’s dealer network in North America. Please note, the 223mm rotor size will be available in the future, but the 2.3 system is supported with 180mm and 203mm rotors now.

Overall, among the mountain bike riders in attendance, the universal compliment was that “We love that TRP is entering the drivetrain category and the added competition makes everyone better.” In many cases, a conversation about downhill group options and the fact that there is not much ongoing innovation in this drivetrain category followed the positive comments.

The event mixed of fans, brewery regulars, and the athletes in town for Nationals. TRP offered a free 223 Pale Ale beer (1 per 21yr old customer) to the first 100 attendees. By night’s end, the free beer was drunk and folks were on to Hideaway Park’s taps. TRP’s event ran to 11 pm, but the athletes went home to bed around 9, as they all still had racing to do.