The TRP team spent a lot of time with the team mechanics, discussing with athletes and even taking soil samples from the various trails back to the test lab in Taichung.

A special TRP E-MTB disc brake project caught the attention of our sponsored Intense Team rider Neko Mulally in the summer of 2018, and he was eager to test the brake with the new 223mm diameter 2.3mm rotors (standard rotors measure 1.8mm). Since Neko couldn’t hide his excitement, teammate Aaron Gwin quickly caught on as well. Aaron was so excited that he competed with the TRP E-MTB brake with 223/2.3 mm rotors at the UCI Downhill World Championships on September 8, 2018 in Lenzerheide/Switzerland and finished 5th. At the first race of the 2019 World Cup season in Maribor, all TRP downhill teams rode with the new TRP DHR disc brake.

The mix of switching from 27.5 to 29-inch wheels and steeper trails increased the performance demands during the current season. Suddenly, good brakes weren’t good enough.
“Downhill bikes get faster every year. As frames, geometry and wheels change, brakes and all other components have to adapt. Looking back, the path is logical, we were running 200mm / 180mm when we were on 26″ wheels, everyone is running 203mm with 27.5 wheels, so it only makes sense to upgrade to the bigger 223 / 2.3mm rotors with 29″ wheels.” Thomas Estaque, Team Commencal 100%.

The TRP development team traveled to team camps and World Cups in Maribor, Leogang, Les Gets and Snowshoe. They spent a lot of time with the team mechanics, discussed with athletes and took soil samples of the various tracks back to the test lab in Taichung. The task: How can we adapt our braking performance to the new World Cup level as quickly as possible? With performance as the main focus, every little part was considered and at the end of the season the result was a completely redesigned DHR: the new DHR EVO.

New ergonomic 1-2 finger brake levers, redesigned brake pad compounds, new performance mineral oil, new more pressure stable 5 mm brake lines, new CNC machined adapters, new selection of 2.3mm rotors, newly optimized oil flow inside the calipers, and a new smaller brake lever piston. All these details together have brought the overall performance of the DHR EVO to a noticeably higher level. This performance was tested for the first time in October 2019 at the legendary Red Bull Rampage Freeride event by Scott DH Factory rider Brendan Fairclough was able to safely navigate the course and take 4th place.
Thanks to all the athletes and mechanics for their confidence and hard testing work. 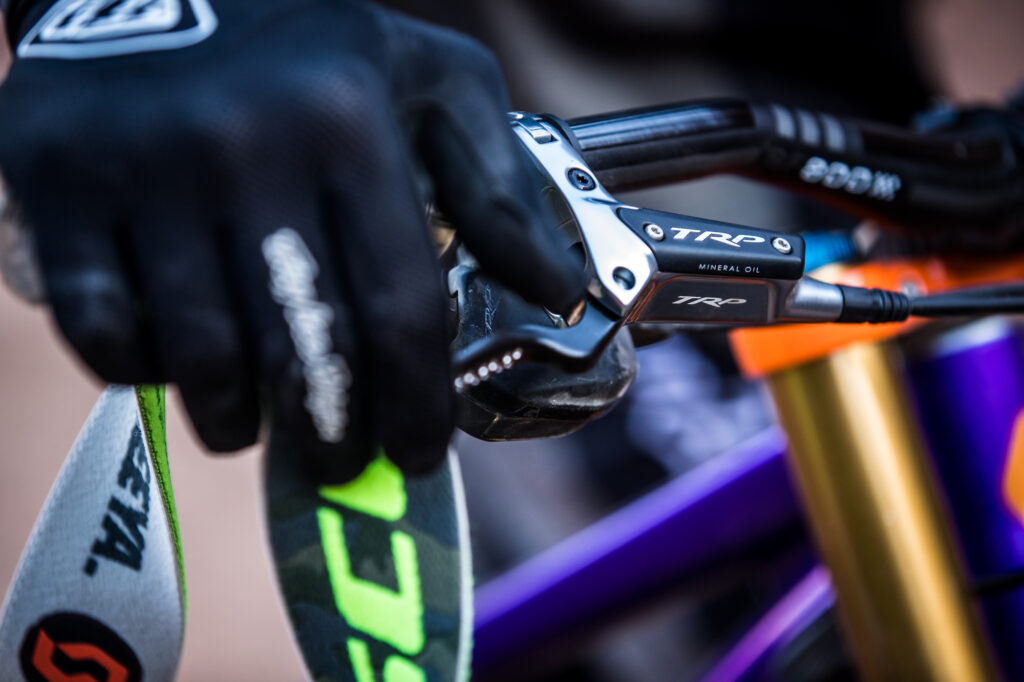 “WHEN IT COMES TO BRAKING, I ALWAYS PUT PERFORMANCE ABOVE ALL ELSE. WEIGHT IS SECONDARY, IT’S IMPORTANT TO ME THAT MY BRAKES HAVE THE ABSOLUTE BEST POWER, MODULATION AND STABILITY WE CAN GET. THE LARGER 29ER WHEELS ARE ANOTHER CHALLENGE DOWNHILL. NOW WE HAVE A BRAKE THAT IS BOTH EXTREMELY POWERFUL AND HAS THE SENSITIVITY AND MODULATION TO HANDLE SAFELY AND EASILY.”

What was the most difficult part of the DHR redesign process?
Redesigning the oil flow in the caliper was the most challenging and required the most effort and time. After we turned all our ideas into prototype solutions, we tested them in the lab and with our athletes. The team mechanics gave us a lot of feedback on the venting and we had to pay attention to every detail to find the best solution. It felt like panning for gold.

What did the TRP development team learn during this process?
We worked with a larger number of prototypes than before while involving many more different testers. In addition to the riders on our four teams and their mechanics, that included a group of dealers and end users. It was important to us that all the testers had a wide variety of experience with all the products on the market. This heterogeneous mix of international testers was key.

What was most helpful to the TRP team in achieving the new product level?
The change in the development process from product-oriented to customer-oriented and the team mix. Before we started, the team was trained in this agile approach, a challenge for our engineers especially in the beginning. We spent a lot of time with the individual driver and their mechanics, a lot of watching and listening. This was always done in teams, there was a TRP engineer and marketing or sales guy there. This different way of looking at problems gave us a steep learning curve. Once you got used to it, the work became much faster and more successful.